We’ll start in the Technique corner because that’s what most of us are already familiar with. It’s easy to focus on Technique because it’s like low-hanging fruit. In fact, when a lot of leaders talk about improving their sales team, improving Technique is all they consider: what to do and how to do it, what to say and how to say it, what not to do and why you shouldn’t do it. The tactics. A whole lot of sales leaders seem to operate on the assumption that Technique is all there is. Actually, it’s not, but Technique is nevertheless extremely important!

As it happens, Sandler is quite widely known for Technique. We’re world-renowned for great tactics and great strategies that sales professionals can learn and implement. But is that what has made Sandler the standard of excellence in professional selling for over half a century? Not really. What makes Sandler great is that we work on the other two points of the Success Triangle, too. As a sales leader, you, too will probably want to work on all three points of this model and help the salespeople who report to you to do the same.

For instance, consider Behaviors. When and how often do the Techniques we’ve learned actually get put into practice? If we know how to perform a Technique, but we never (or rarely) bother to execute it, is that going to help us? Of course not.

So: Do your people and do you as a sales leader know what needs to happen every single day in order to make success a reality? In other words, is there a behavioral plan? You know the old joke about how to eat an elephant: a bite at a time. Well, if someone on your sales team knows that their quota is ten million dollars per year, could they tell you how they are going to break up that elephant in terms of the daily behaviors?

People can only manage what they can control. They can’t control the final outcome at the end of the year. All they can control is the behaviors that produce the outcomes. Can your team members break it all down? Can they reverse engineer their sales funnel? Can they tell you exactly what it takes every single day, as far as their personal behavior is concerned? Can they set up a viable behavioral battle plan to get to that ten-million-dollar figure?

Our experience is that eight out of ten salespeople cannot tell their sales leader what that plan is. That should be an aha moment for us. Yes, we should work on the tactics and the strategies. But if there is no behavioral plan to meet and exceed the goals, it’s all for naught.

How about Attitude? Well, attitude is just as important as the other two corners, but for some reason a whole lot of people overlook it. To put it bluntly: If their heads are not on straight, we're in trouble as the leader of the team.

Back when we were little kids, and our mom or dad turned the lights off at the end of the day, we were afraid of the monsters that we thought lived under our bed. They would cause us fear, doubt, and worry; so much so that we even convinced ourselves sometimes that we could see and hear them! Then what happened? A little time went by and we grew up, but that didn’t mean we were free of the monsters. They just took different forms and showed up in different spaces: our locker, our dorm room. Eventually, they took up residence in our desks and telephones and computers. We’re professionals, now, grownups . . . but most of us still have monsters that can cause us fear, doubt, and worry. And we still convince ourselves the monsters are real when they aren’t.

Attitude is our mindset. Is it a mindset of fear, doubt, and worry? If so, we have some work to do on our self-talk and our self-concept. We can talk ourselves in or out of greatness. And we may be talking ourselves out of greatness every time we start fantasizing about bad outcomes that never actually happen.


David Sandler knew that successful people in all walks of life excel at all three corners of the Success Triangle. He knew that they work continually at developing themselves in all three areas: Attitude, Behavior, and Technique. If you can make a personal commitment to do that kind of work on yourself, and inspire the members of your team to do the same kind of work on themselves, your team will be on top of the world.

So, understand the Success Triangle. Talk about it with each person on your team. And live it! 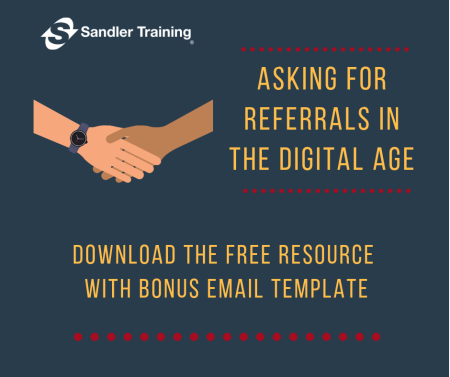 How to Lower Stress in Sales

Motivation and the Curse of the Comfort Zone

Sales Pros Have to Practice, Too